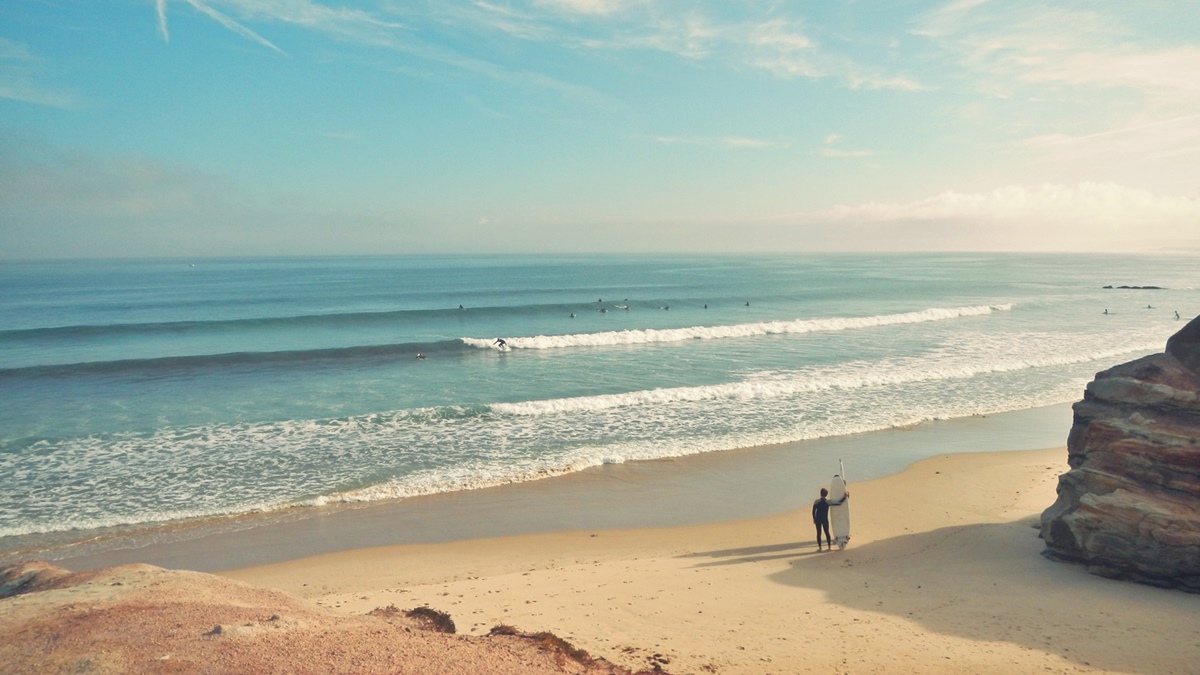 Undoubtedly, the Peniche area in central Portugal offers some of the most consistent waves in Europe. Its 270° swell window and close proximity of easily accessible spots make it a prime surfing destination – up to the point that overcrowding has become a major problem for surfers.

Because even the largest beach breaks can only hold a certain amount of surfers before wave riding becomes impossible.

Peniche and nearby Baleal offer over 20 different surf spots within 30 minutes of driving. But the conditions like the tide, swell & wind directions often narrows the selection to only one obvious wave choice and a couple of ‘maybe still ok’ alternatives.

If there’s only a couple of spots working, the crowd can get so thick that it’s pointless to paddle out.

On some of the most overcrowded lineups, you won’t get a wave unless you are the best in the pack or practice some reckless snaking & dropping. And even if you take off, there isn’t much space to enjoy the wave. You’ll have to adjust your line around everybody in your way or try to perform critical maneuvers over the poor beginner’s heads.

So what to do? Traveling elsewhere is one option, but the wave consistency and good accessibility keep us coming back to Peniche. Learning a couple of tricks may help.

#1 – Plan your trips in the right season

In order to avoid most of the people, it’s always good to know when they are usually coming. Most likely, you’ll never be alone in Peniche, but there are times of the year when the crowds are thinner.

Learning surfing is a thing in Peniche. There are over 20 surf schools or surf camps operating in the area. Luckily, there is one rule on how to measure the beginner crowds – the sun. Because most of the people who come to learn to surf are on holidays, they want to do it in the summer when the days are warm. Some of them may have heard that the Atlantic water is warmer in the autumn so the beginner’s season is now spread well over into the fall.

Of course, the beginners are no factor once the waves get over the chest or head high. But if you want to surf smaller waves without the crowds, try to avoid summer and early fall.

There are still enough small wave days even in the winter – just look for the spots that are not directly in the swell’s path.

Even in the summer, the crowds tend to stay longer in the water when it’s sunny as opposed to a foggy or windy day. So if you know a certain spot will be working later during a clouded or windy day, just wait until the surf schools finish their lessons, prepare a thicker wetsuit, and enjoy a ‘sunset’ session – without the sun.

It’s hard to throw all of the locals into one category. You can have the very good or pro-surfers who don’t give a shit about the regular mortal crowd. Then you have the ‘weekend warriors’ who are harmless and almost indistinguishable from the tourist crowds. And then you may meet a couple of the ‘evil’ locals – who are not that great surfers and feel frustrated or threatened by the visiting crowd. The last group is the only one that will ever start arguing or fighting over imaginary wave ownership rights.

Without going further into details, most of the locals need to work. This makes it relatively easy to avoid surfing with them.

The golden rule is to avoid weekends. The ‘local’ crowd in Peniche quadruples over the weekends as it adds all the people who have to work in Lisbon. Also, there are some surfers from Lisbon who like to act like locals in Peniche – they may own an apartment nearby and come to surf here for many years. If you need to surf during the weekend, prepare to face the crowd or explore some of the more remote spots.

Working out the hours when the most of the locals are at work is also helpful (see next chapter).

A lot of the surfers have kids & families too. Studying the Portuguese holiday calendar is a great help if you want to avoid the crowd too. The school holiday in the Summer has a huge effect, it starts around mid-jun and finishes in the middle of September. But the largest local crowds are arriving at Peniche in the peak of the summer in July & August. Easter holiday is also popular.

These are the hardest to avoid because they may include also you & me – and anybody who’s reading this article. But there is an obvious pattern in the European visiting surfers each year. It revolves around the distance from countries where there is no surf (Germany, Central Europe, Scandinavia…), water temperature, and the quality of waves available at each time of the year.

There is one big difference compared to beginner crowds – every average European surfer knows that the waves are better in the autumn and the water is still warm. So as in the whole continent, September, October & November are the busy months in Peniche too.

Wearing a thicker wetsuit and trying your luck in the winter or spring is the only way to avoid most of the crowd.

I like to come to Peniche in June. It may not be ideal in terms of water temperature or the quality of swells. And there will be some crowds. But the days are so long that you can surf from 5 AM until 10 PM. This gives you plenty of opportunities to find a window when you can enjoy the waves without the thick crowds.

#2 – Try to find an uncrowded time slot during the day

This is easier said than done because the big Portuguese tides are against you. But if the conditions are right, you shouldn’t hesitate to paddle out.

Think very early. Even that may not guarantee that you will be surfing alone. But at least you will avoid some crowd. Most of the people sleeping in the vans have usually trouble waking up early in the mornings. Then there are the holidaymakers who enjoy other activities in the evening. And the surf schools who are starting their lessons around 10.

Most of the people are used to eat around lunchtime, surfers included. If you are able to time your energy levels differently, you are almost certain to find a window with fewer people in the water around 12-1 PM.

Once the sun starts to set, it gets cold pretty quickly in Peniche. That’s one of the reasons why the sunset sessions are not that popular here. Another being the fact that most of the visiting surfers spend their energy in the morning and afternoon sessions, needing some rest & relaxation after all day in the cold ocean. The third reason is quite surprising:

I don’t know why but a lot of the restaurants in Peniche and Baleal close at 10 PM!

That means you can’t surf until dark, then head back to your apartment, take a shower and everything else, and effectively making it before the closing time. So if you don’t cook your own, you’re not eating after a long sunset session!

What times to avoid?

There are two ultra crowded windows that I always try to avoid in Peniche:

First is 10 AM – the time when both the early risers and the late sleepers are in the water and most of the surf schools begin their lessons.

Second busy window is the after work hours. These may of course vary but 5-7 pm tends to be the busiest.

Especially in the summer, the crowds like to get wild on Friday. Some of the local beach bars are open until 5 and if you’re not there, then you should be heading out for a surf. A couple of my most memorable surf sessions happened on Saturday morning.

#3 – Choose a spot that is less accessible

It’s easy to park your car on the main spot and jump in the water. And it’s even more comfortable to walk from your apartment without using any car. That’s why the crowds concentrate on those easily accessible surf spots.

Even something so simple as walking 500m with your surfboard can be seen as a problem for many people.

Yeah, chances are that you won’t be surfing the absolute best peak at the moment. But think for yourself if it’s worth it: To hassle for the best wave that you get dropped on anyway, or to still catch a decent one with just you or a couple of mellow surfers?

There are many surf spots in Peniche that are not directly in front of the car park. To name a few: Middle of the Bay, Secrets & Piscinas. And even others like Bruno’s, Almagreira & Pico da Mota have multiple peaks where you can often find an empty wave just for yourself.

As you can see, to avoid the crowds in surfing we need to understand some background information so you can plan ahead, be prepared to endure a little bit of discomfort, and also have a bit of luck to get the right conditions at the right time. I’m hoping that reading this will help and remember: we all are the crowd, so behaving nicely to each other and to our environment is the only way to enjoy every wave.